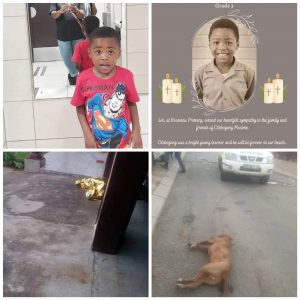 A pit bull was killed after it mauled an eight-year-old boy to death in Bloemfontein, the capital of the Free State province, South Africa.

The grade 3 learner identified as Olebogeng Mosime, had been playing in his yard in Vista Park at around 2pm on Saturday, November 12, 2022 when the dog belonging to his neighbour escaped from its enclosure, jumped over the fence and attacked him.

Police spokesperson Lt-Col Thabo Covane, who confirmed the incident in a statement on Sunday, said the dog attacked the child, who was playing alone. It bit him severely on the neck and chest.

“Police and paramedics were summoned to the scene, and the boy was declared dead on the scene,” Covane said.

An inquest docket has since been opened at the Mangaung police station.

The Bloemfontein SPCA said the neighbour’s two other dogs had been removed and were in the care of the SPCA for safekeeping.

“The Bloemfontein SPCA sends its utmost condolences to the child’s family and will keep them in our thoughts and prayers during this very difficult time. The loss of a child is something that no parent, family member or friend has to endure, and all the loved ones have our utmost sympathy,” the organisation said in a post.

The SPCA pleaded with pet owners to surrender dogs that could be a danger to the community or family.

“The Bloemfontein SPCA will also make collection services available to any owner that does not have the means to take aggressive animals to the SPCA directly. The loss of life, any life, is tragic and in a preventive measure, we would like to plead with the public that aggressive animals should be surrendered to the Bloemfontein society so that similar incidents do not occur and that even at the end of an aggressive animal’s life it is treated with dignity and respect,” the organisation added.

This is the latest killing of a child by the breed in recent months.

In September, a 10-year-old was mauled to death by the family’s two pit bulls at his home in the Eastern Cape.

After several vicious, deadly attacks there have been mounting calls to ban the breed for domestic purposes.

Last month, an online petition calling for an end to ownership of pit bulls was launched.

The Sizwe Kupelo foundation, which is behind the petition, said: “The call to ban pit bulls in South Africa comes as other countries like Russia, Finland, Denmark, the UK, Portugal, parts of Germany, parts of China, parts of Brazil and parts of Australia, among a host of countries have either banned, put restrictions on ownership of the breed or its importation.”

The organisation’s founder Sizwe Kupelo said: “The defence by pit bull lovers that it is how you raise the dog does not hold water. So many people, including joggers, have been attacked and killed by pit bulls.

“It is time that the South African government takes decisive steps and imposes a complete ban on the ownership of pit bulls as domestic animals. Such a move would prevent further attacks and unnecessary deaths. We cannot continue sending out messages of condolences for something that can easily be prevented.”

The petition had garnered almost 50,000 signatures.