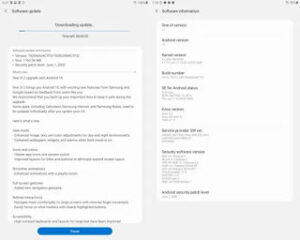 The Samsung Galaxy Tab S4 has now started receiving the new Samsung oneUI 2.1 which is based on Google’s Android 10 OS.

The new update has the build number T830XXU4CTF5 and it is now available for both the 4G LTE and the WiFi only version. It weighs in at around 1.76GB and it includes Google’s June 1 2020 Android security patch.
The Android 10 update for the Galaxy Tab S4 comes with the new features like system-wide dark mode, navigation gesture, digital wellbeing, refreshed icons and many more. The update has already started rolling out to Samsung Galaxy Tab S4 users in USA, Canada and UK. It is expected to get to all users in the coming days.