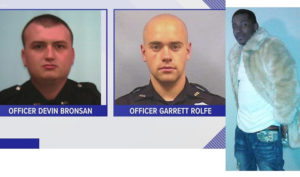 Atlanta Police officer involved in the fatal shooting of Rayshard Brooks has been fired, his colleague placed on administrative leave

One of the Atlanta Police officers involved in the fatal shooting of a black man in the parking lot of a Wendy’s restaurant has been fired, while his other colleague was placed on administrative leave.

Garrett Rolfe, a six-year veteran of the Atlanta Police Department, was fired, and a second officer, Devin Bronsan, a nearly two-year veteran, was placed on administrative leave for their involvement in the death of Rayshard Brooks, 27, on Friday night, Atlanta Police spokesman Carlos Campos said.

The announcement came after Atlanta Mayor Keisha Lance Bottoms recommended that the officer who fired the shot be terminated immediately.

The shooting also led to the resignation of Atlanta Police Chief Erika Shields, and the Wendy’s where Brooks was shot was engulfed in an arson attack as protests in Atlanta grew on Saturday night. The Wendy’s burned for more than an hour before firefighters extinguished the flames.

The Georgia Bureau of Investigation confirmed that Rayshard Brooks was shot during a struggle and died after surgery at a local hospital.

Brooks had been asleep in his car in a Wendy’s drive-thru, causing other customers to drive around the car, the Bureau of Investigation said. Police were dispatched to Wendy’s around 10:30 p.m. and conducted a sobriety test on Brooks, who failed the test, according to the officials.

“During the arrest, the male subject resisted and a struggle ensued,” the Bureau of Investigation said.

Video from the scene shows Rayshard struggling on the ground with two police officers over the Taser. As he stood up and started running away, both cops chased him from behind before one of them fired three-times at Rayshard.

The Georgia Bureau of Investigation later released a surveillance video which captured the officer who fired three shots to Rayshard’s back until he collapsed to the ground.