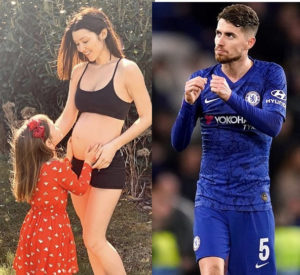 Chelsea midfielder, Jorginho is expecting a child with The Voice star Catherine Harding after separating from his wife Natalia Leteri

Chelsea and Italian footballer, Jorginho is expecting a child with The Voice star Catherine Harding following his split from his now-estranged wife, Natalia Leteri.

Last month, the singer, 29, announced she was pregnant on Mother’s Day but did not reveal who the father of her unborn baby is.

‘Stressed or dealing with whatever problems they may have in their lives but always make their children priority. You are amazing!!

‘Five years ago on Mother’s Day 2015 my beautiful daughter was born and now in a time of such sadness and pain in the world, when we realise how fragile life can be I am so grateful to be blessed with the most powerful gift of life.

Jorginho, 28, has two children, Vitor and Alicia, with his estranged wife, who he secretly separated from last year before he started dating Catherine. The pair were together for eight years before they tied the knot in 2017.

A source told the UK Sun: ‘Cat fell hard for him and has struggled to keep their romance a secret. It became known to her circle of friends, the music industry and — through her role on The Voice — backstage on TV.

‘She told Jorginho she was pregnant just before her announcement. He was delighted and she’s looking forward to becoming a mother for the second time.’