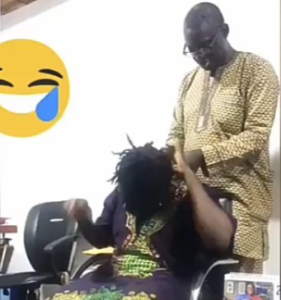 A cute video of a man cheerfully making his better half’s hair while engaging her with a move and melodies has warmed the core of Instagram clients.

In the video shared on the web, the man is considered remaining to be his significant other as he attempted to unravel her locs. He kidded about her hair being tangled, at that point compared her locs to Raskimono’s and Daddy Showkey’s. He at that point proceeded to sing Daddy Shokwey’s melody.

“Somebody call my name, Showkey,” he sang and danced a bit before going back to the hair.

As he handled his wife’s hair, she directed him, saying “Oya, twist that one. Twist that second one.”

The man then broke into another song. This time he sang Daddy Showkey’s “Hossana” as he twisted his wife’s hair.

“If you see my mama, Hossana, tell am say oh, I dey Ikeja, I dey do hairdresser,” he remixed the song to his wife’s amusement.

Watch the video below.