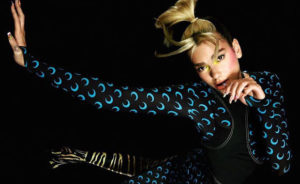 Dua Lipa kicked off her Future Nostalgia era at the end of 2019 with the magnificent “Don’t Start Now” and promptly landed a global hit. (I even crowned it the year’s best song). The Brit followed that up with the album’s quirky title track, but she’s finally ready to roll out the official second single. Dua shared the cover of “Physical” last week and now teases the elaborate video, which includes a closeup of a Rubik’s cube, some colorful choreography and a giant diamond suspended in the air.

“Physical” arrives on Friday (January 31) and is destined to be one of the week’s biggest releases. The momentum behind Dua is palpable at the moment and another big hit would cement her status as pop’s next It Girl. After all, it’s refreshing to see someone dedicate themselves so completely to the genre. While the rest of our faves are dabbling in country, chasing a rap feature or trying their hand at stripped-back balladry, the “New Rules” hitmaker is giving us non-stop bangers. Get a taste of “Physical” below.

GUN SHOT DANCE (Everything I do, I do it for you) TikTok Dance Challenge Beat