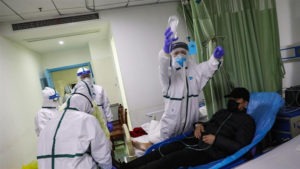 A Chinese tourist who tested positive for the deadly coronavirus has become the first person to die in Europe since the outbreak which emanated from Wuhan, in mainland China.

The patient, who was 80 years old, had been receiving treatment at the Bichat Hospital in Paris since January 25, according to a statement on Saturday from French Health Minister Agnes Buzyn.

The victim arrived in France on 16 January and was placed into quarantine in a hospital in France on 25 January, Health minister Agnes Buzyn added.

More than 1,500 have died from the coronavirus in mainland China, while total number of infected people is now at 67,000.

With this new development, the patients death is officially the fourth death to have occurred outside of China, but first to have happened in Europe. with one death recorded in Hong Kong, the Philippines and Japan.