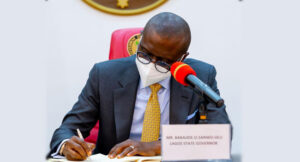 Sanwo-Olu assented to the bill at the Lagos House on Monday September 20. The Governor’s aide on print media, Wale Ajetunmobi confirmed the development.

Lagos State House of Assembly had on Thursday, September 9, 2021, passed the bill entitled, “A bill for a law to Prohibit Open Cattle Grazing In Lagos State, the Trespass of Cattle Land And For Other Connected Purposes”.

Lagos is now the fourth southern state to sign the anti-open grazing bill into law, after Rivers, Ondo, Enugu, and Akwa Ibom.