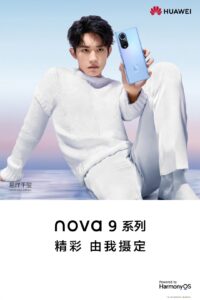 Huawei had recently revealed the September 23 launch date for its upcoming Nova 9 series of smartphones. The company has been teasing this new lineup prior to its launch and has now released a short film to showcase the camera of the new smartphones.

The brand shared the new short film on its official Weibo account, a Chinese microblogging website. In the video, we can see the Chinese celebrity Yi Yang Qianxi who highlighted the device’s camera capabilities that can be used for vlogging (video blogging) through the HarmonyOS multi camera mode as well. For those unaware, the Nova 9 will sport a quad camera setup on the rear while the front facing selfie shooter will be housed in a pill shaped punch hole cutout.

Previously, the smartphone was recently certified by 3C as well as TENAA, revealing some key specifications and features. The variant that carried the model number RTE-AL00, features an OLED display with an under display fingerprint sensor. Furthermore, the series is likely to come powered by the Qualcomm Snapdragon 778G SoC, but will reportedly arrive with support for only 4G LTE connectivity and not 5G networking.

But, there’s a possibility that the company may launch a 5G variant at a later date. The Huawei Nova 9 is said to be powered by a 4,500mAh battery while the Pro variant in the lineup will reportedly pack a 4,000mAh battery but will have support for a 66W fast charging. So stay tuned for more, as we will be covering the launch event later this month.

how to get free 250mb on airtel [ Airtel Anniversary ]