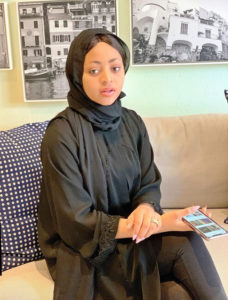 Young Nollywood actress, Regina Daniels has become the topic of discussion on Instagram after she posted a photo of herself in hijab.

The actress shared the photo on Instagram on Wednesday. She appeared in a decent black ensemble that covered most parts of her body.

Two things that was unusual about her in the photo includes her hijab and how she did not expose her body. However, because of her hijab, some of her fans have assumed that she dumped christianity for Islam because her billionaire husband is a muslim.

Her comment on the photo about change in the things in her life also triggered the assumption. She wrote; ‘If nothing ever changed, there would be no butterfly’.

Fans who commented on the photo interpreted that she was trying to hint in the caption that she has turned an Islam and begun to slam her.