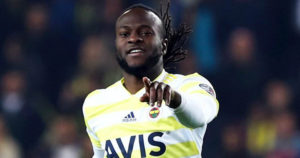 Ex-Super Eagles of Nigeria winger Victor Moses has agreed terms with Inter Milan over a loan move and is set to undergo a medical with the Milan based club as soon as possible.

Inter Milan, chasing the Italian scudetto, are revamping their squad this January with the addition of Ashley Young, and the imminent additions of Christian Eriksen and Victor Moses set to give Juventus a run for their money in the Italian league.

Moses has played for Chelsea, Liverpool, West Ham and Fenerbahce during his career operating majorly as a wingback or winger.

Sky Sports and Gazzetta report that Inter will sign him from Chelsea on a loan with option to buy at €10 million & there’s been a total agreement between all parties.

Moses, still under contract with Chelsea, has had a turbulent season since joining Fenerbahce on loan in the summer, scoring only one goal, but Antonio Conte, Inter Milan’s coach drew on his experience in working with Moses while at Chelsea to sign the dominating winger.