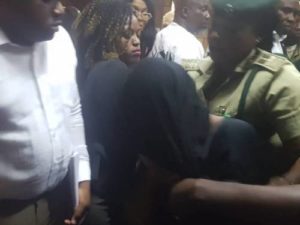 Just In: Federal Capital Territory High Court has condemned Maryam Sanda to death by hanging for killing her Husband

She has been standing preliminary for supposed at fault murder.

Sanda had on November 19, 2017 stabbed her husband to death following an allegation of infidelity against him after seeing a text message on his phone.

She was charged for culpable homicide alongside her mother, former Managing Director of Aso Savings, Hajia Maimuna Aliyu, and their home help, Sadiya Aminu.

Maimuna was charged for assisting Sanda to conceal the evidence by cleaning the blood of the deceased from the scene of the crime.

The trial judge, Yusuf Halilu, said Sanda was guilty of the offence and deserved to die.

The judge said, “Convict clearly deserve to die. I therefore sentence Sanda to death by hanging.”