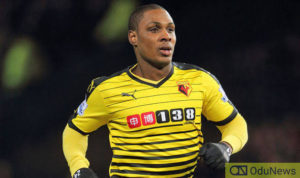 Manchester United football club of England is in talks to sign Nigerian striker Odion Ighalo according to new reports.

The English club is reportedly ‘desperate’ for a striker following a three months injury to Marcus Rashford and a shock 2-0 loss to Burnley on Wednesday.

Man U had made former Solksjaer player, Erling Braut Haaland, one of their top targets ahead of January, but a deal broke down because of doubts surrounding the structure of the deal and the agent Mino Raiola’s plan to rip off the club in any future sale of the player.

Slimani is a Leicester player but is on loan at Monaco while Ighalo plays in the Chinese league with Shanghai Shenhua.

“It’s just an unfortunate situation we are in,” he told Sky Sports.

“It might be because the window is open, that we look at some short-term options.