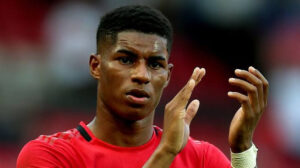 Manchester United striker, Marcus Rashford will receive an honorary degree from The University of Manchester for summer charity campaign against child poverty.

Rashford, 22 , raised over £20 million ($25m) to aid vulnerable people and children during the Coronavirus lockdown and in June was widely praised for writing an emotional letter to the UK government sharing how he survived starvation as a youth while urging the government to continue the policy of allowing children benefit from free school meals.

The University of Manchester have now decided to honour Rashford with an honorary doctorate for his work in the community, making him the youngest recipient of the award.

Other recipients in the past include United legends Sir Alex Ferguson and Sir Bobby Charlton.

Rashford has released a statement announcing the award, which reads: “It’s a proud day for myself and my family. When you look at the great names that have been awarded this doctorate in the past, it’s humbling.

“We still have a long way to go in the fight to combat child poverty in this country but receiving recognition from your city means we are heading in the right direction and that means a lot. Thank you to The University of Manchester.”

“His work for charity and his high-profile campaign will not only help countless young people across our own city, but across the entire country.

“Our university has social responsibility at its core and this sense of civic pride and duty is something we are proud to share with Marcus. That is why the university is delighted to make Marcus our youngest ever recipient of an honorary degree.”

A United spokesman reacting to the development said;

“Marcus is an exceptional player and an exceptional person. His work with FareShare and his focus on child poverty make him richly deserving of this tremendous honour and everyone at Manchester United is incredibly proud of him.”