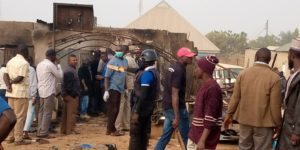 No fewer than 3 persons have been confirmed dead in a gas explosion that occured at the Sabon Tasha area in Kaduna state today Saturday January 4th. The gas station located by the main road opposite Total Filling station, at the ever busy Sabon Tasha exploded at about 1pm.

The explosion shattered the bodies of those who lost their lives in the incident. Security operatives were seen packing body parts which littered the road.

An eyewitness, Philip Kambai, who escaped the blast, said

“I just finished cutting my hair and was walking out then I heard boom! I fell down but I managed to get up. Then I saw fire. Immediately, I went behind and climbed a fence and in the process, I sustained injuries. One person also climbed the fence, but I doubt if the barber and two others came out”.

See more photos from the scene of the incident below.