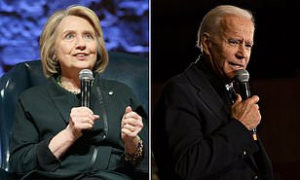 With only a year to go before the 2020 US presidential races, another survey has indicated that previous US Secretary of State, Hillary Clinton will battle for top spot with Joe Biden if she somehow managed to enter the presidential race at the present time.

The study of 2000 enrolled voters completed from October 28-31 by Harvard Harris shows that Clinton would get 18 percent of the vote on the off chance that she entered the race today, while 19 percent of Democrats would decide in favor of Biden, who has 33 percent of the help as of now.

It should be remembered that last month, Clinton suggested in a PBS interview that she could ‘beat’ Trump in 2020.

The former secretary of state told a PBS reporter, “Maybe there does need to be a rematch” with President Trump.

Clinton lost the Electoral vote to Trump in 2016 but won the popular vote .