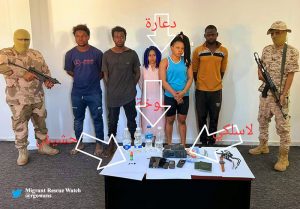 Security forces in Libya have arrested five Nigerian and Ghanaian nationals for allegedly running a brothel in a rented apartment.

According to Migrant Rescue Watch, the suspects were arrested in Tajoura, a town in north-western Libya, on Monday, October 24, 2022.