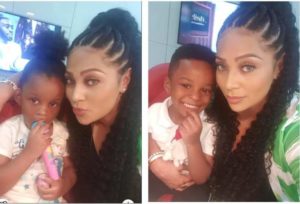 It appears the spouses of Paul and Peter Okoye, Lola Omotayo and Anita, are on acceptable terms in spite of the ill will between their husbands.

In 2018, the twin brothers of the P-Square, Peter, and Paul, decided to split up and become solo artists. This decision broke the heart of their fans and ever since then, it has been no secret that there is bad blood between the brothers.

However, it seems like it is not the same for their wives. In a recent post on Instagram, Omotayo was seen having a good time with Paul’s wife, Anita Okoye’s kids, Nadia and Nathan.

Peter’s wife shared the photo with a caption, gushing about Nathan and Nadia. She stated that they are her favourite twins. Omotayo, who described herself as auntie lollipop, added that the twins make her heart melt.