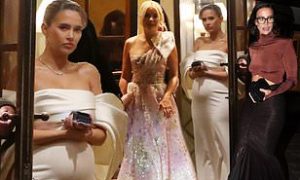 An expectant was among the stars making an early exit following the star-studded Pride Of Britain Awards red carpet on Monday night.

After dazzling in a glamorous white gown, the Love Island star was fixated on her phone as she left London’s Grosvenor House following the glamorous awards event.

Among those seen departing the swanky venue were and , with the stars clearly all partied out following the lavish awards event.

As a doorman kindly let her out of the venue, Molly was seen checking her phone before preparing to head home from the glamorous awards event.

The mother-to-be had stunned on the red carpet in a form-fitting white gown with feathered trim that showed off her growing bump.

Molly-Mae was without her boyfriend Tommy Fury for the awards show, with the couple set to welcome a baby girl in the coming weeks.