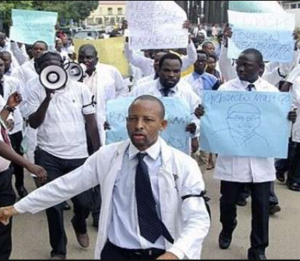 The National Association of Resident Doctors has announced the suspension of the nationwide strike with effect from Monday, June 22, 2020.

The strike commenced on Monday, June 15, after the expiration of a 14-day ultimatum. The union took the decision to go on strike after a series of meetings between the doctors and the Federal Government ended in an impasse.

However, the union has now announced that the strike has been suspended less than one week after it began.

NARD made the announcement in a communique read to journalists by its President, Dr. Aliyu Sokomba, on Sunday, June 21, in Abuja after its National Executive Council meeting attended by over 300 members.

The organisation said it took the decision in order to enable the government time to fulfill outstanding demands following an appeal by the Speaker of the House of Representatives, Femi Gbajabiamila, Secretary to the Government of the Federation, Boss Mustapha, Chairman of the Nigeria Governors’ Forum and other stakeholders.