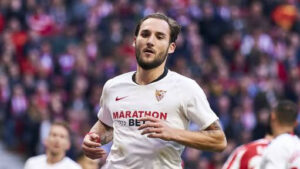 Sevilla have confirmed star player Nemanja Gudelj has tested positive for Coronavirus, putting it’s Europa league clash with Roma next week at risk, as a fresh wave of the virus hits Spain.

According to the club’s statement posted to fans on Twitter, Gudelj is asymptomatic and self-isolating at home, but the club has suspended training sessions.

“Good afternoon everybody, after confirming my positive Covid-19 test I want to tell you all that I am perfectly fine, I have no symptoms,” Gudelj posted on Twitter.

“I hope to be back with my team-mates soon and help the club reach its goals at the end of this season.

“Thanks for all your messages of support, we are still here training and we’ll see you soon.”