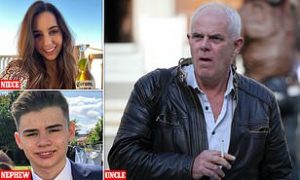 Siblings have uncle jailed for failing to hand over £237k inheritance

Brother and sister have their uncle JAILED for failing to hand over the £237,500 left to them in their grandmother’s will – and refusing to reveal what he did with the money

A brother and sister have had their wedding planner uncle jailed in a £475,000 family fight over their grandmother’s will.

Mark Totton was left in charge of his mother, Hazel Totton’s estate when she died in 2019, leaving half of her worldly goods to her granddaughter, businesswoman Hollie Totton, 25, and grandson Daniel Washer, 19.

But three years later, the wedding and events planner has failed to give his young niece and nephew their £118,750 share of the inheritance and still refuses to say what he did with the money.

The siblings, from Essex, sued their uncle at the High Court – and have now had him jailed for breaching a court order aimed at getting him to hand over their grandmother’s cash to them.

Mr Justice Leech said Mr Totton had ‘deliberately failed to comply with his duties as executor’, and ‘flouted orders of the court’ with the result that his niece and nephew have been kept out of their money for three years already.

On Friday, the High Court in London heard that the brother and sister were each left a quarter of their grandmother’s £475,000 fortune when she died in 2019, with their uncle getting the other half.