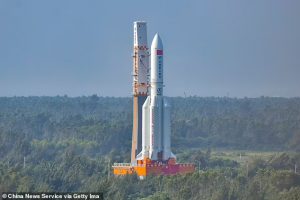 Several Spanish airports have closed their airspace because of an out-of-control 21-ton Chinese rocket plummeting to Earth that may smash a plane.

Flights into and out of Barcelona, Tarragona, Ibiza, and Reus are known to have been grounded with reports other regions including La Rioja and Castilla and Leon have also shut operations.

The measure is expected to last around 40 minutes, although local reports are pointing to the possibility places like Ibiza could be affected for up to three hours.

A spokesman for Catalonia’s Civil Protection Agency confirmed: “Due to the risk associated with the passage of the CZ-5B space object crossing Spanish airspace, flights have been completely restricted from 9.38am to 10.18am in Catalonia and other communities.

“Airports and other organisations have already been informed.”

Spanish air traffic controllers tweeted: “Eurocontrol has informed us about the non-controlled re-entry of a Chinese rocket into the Earth’s atmosphere.

“Rate Zero has been established for certain parts of Spanish airspace and that could affect air traffic by way of delays and diversions.”

She said on Twitter: “The uncertainty of where the large debris will ultimately land presents a level of risk to human safety and property damage that is well above commonly accepted thresholds.

“If your latitude is higher than that of France or Portland, Oregon, you’re probably in the clear.”

China launched the third and final piece of its new Tiangong space station on Monday – and warnings had been sounded about the rocket’s 23-ton body coming back down on Earth with Spain identified as one of the countries in its path.

The modular, named Mengtain reportedly blasted into space from the Wenchang Satellite Launch Centre on the southern island province of Hainan.

Mengtian, or ‘Celestial Dream’, joins Wentian as the second laboratory module for the station, collectively known as Tiangong, or ‘Celestial Palace’. Both are connected to the Tianhe core module where the crew lives and works.

As it tumbles back to Earth, it will send large and heavy pieces of debris that will hit the surface, according to the New York Times.

Aerospace Corporation shared ‘there is a non-zero probability’ that the debris will land in a populated area – in other words, it’s not impossible, so it could happen.

‘A re-entry of this size will not burn up in the Earth’s atmosphere,’ said Aerospace Corporation, which is based in El Segundo, California.

‘The general rule of thumb is that 20-40 percent of the mass of a large object will reach the ground, though it depends on the design of the object.’