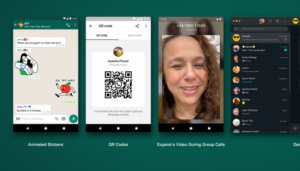 It is the beginning of the month and we are expected to see new features from the Facebook-owned messaging app WhatsApp in the coming weeks.

Though we’ve heard about some of them like Animated stickers, QR Codes, that can be used to easily add new contacts. Now they are being made official even though the beta users have been rocking it for a while.

Being able to add contacts via QR code is one of the more interesting features on the list since it means you can quickly add a new contact by quickly scanning the code rather than having to enter their full phone number.

Announced today alongside a host of other new features, dark mode will be coming to save your retinas on Whatsapp‘s desktop app and the web version. While it doesn’t appear to be live just yet, the company shared a screenshot of the new look that shows off a black and gray interface punctuated with dark green accents that pair nicely with the more muted background colors.

Finally, if you’re using WhatsApp on a KaiOS smartphone like the Nokia 2720 Flip, you’re now able to use WhatsApp’s stories-style Status feature.

QR codes, animated stickers, and the new group calling button will be arriving in the coming weeks.