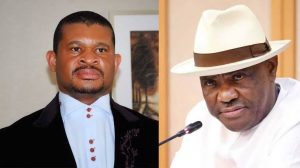 Governor Nyesom Wike has revoked the Certificate of Occupancy of land allocated to Senator Lee Maeba at the Golf Course axis of GRA in Port Harcourt.

Punch reports that Senator Maeba is a staunch supporter of the People’s Democratic Party presidential candidate and also the chairman of the party’s presidential campaign council in Rivers State.

Recall that Governor Wike is at loggerheads with the leadership of his party following the refusal of the party chairman, Iyiorcha Ayu, to resign from office after Atiku, a Northerner, emerged as the party’s presidential flagbearer.

The revocation order was contained in a letter addressed to Senator Maeba on November 2, 2022. The letter was signed by Ochiagha Onyebuchi, the acting Director, Head of Department, Acquisition, Valuation and Compensation, Ministry of Lands and Survey, on behalf of the Permanent Secretary.

“I am directed to inform you that your allocation at Plot 20A Golf Course Layout, old GRA, Port Harcourt, has been cancelled as shown on the attached Rivers State Official Gazette No. 22 Vol. 58, dated September 20, 2022.

Please accept the warm regards of the Permanent Secretary.”

However, when contacted, Maeba expressed surprise at the development in a terse message to our correspondent, saying,

“How can a governor grant a certificate of occupancy and withdraw it six months later?”

He said the land was allocated to him with a Certificate of Occupancy duly signed by Governor Wike himself.

The former senator who represented the Rivers South-East District in the National Assembly in the said C of O made available the publication on Thursday November 3, and it shows the certificate number as 2022/0009/A803005, with file number as RSL/64872

The certificate of occupancy was titled The Government of Rivers State of Nigeria — The Land Use Act Caps vol. 8 len, 2004 carried an embossed colour portrait photo of Senator Maeba.