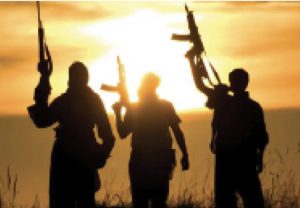 It was gathered that over six hoodlums invaded the residence of the victims around 12 midnight and shot sporadically in the process.

Mr Aliyu and his wife, Sarat, confirmed the incident and said those abducted were Quadir, 15, and Muideen, 12.

“I don’t even know how I survived because they came raining bullets on the house. I hid my wife and five children in one of the rooms and ran elsewhere but they used cutlass and axes to destroy the door beneath to gain entrance. They took two of the children and hit my wife on the chest terribly in the process.

“They took away four phones and have contacted us demanding 20 million naira ransom. This is the third kidnapping incident in weeks in the area and residents have abandoned their properties for fear of being kidnapped,” Aliyu added.

When contacted, the Police Public Relations Officer, Ajayi Okasanmi, said the case might not have been reported at the command headquarters. He promised to get back to our correspondent, but was yet to do so as of the time of filing this report.

The Alagbado community, located at the outskirts of the town close to Okoolowo, had come under several kidnapping attacks in the last one month with some of the victims killed in the process.