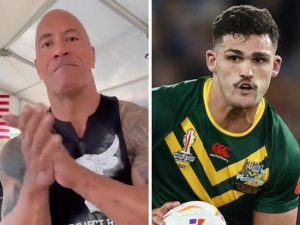 The Rock declares war on Australia

Dwayne Johnson has delivered an epic speech in a message sent to the Samoan team ahead of the Rugby League World Cup final.

Dwayne ‘The Rock’ Johnson has urged Samoa to make history by beating Australia in the Rugby League World Cup final this weekend.

Samoa will be striving to become just the fourth country to win rugby league’s global showpiece event when they take on defending champions Australia at Manchester’s Old Trafford in the early hours of Sunday morning AEDT.

Victory in the final would see Samoa join Australia, New Zealand and Great Britain as the only nations to win the Rugby League World Cup since the tournament’s first edition in 1954.

The Pacific island nation has already made history, becoming the first team outside of that trio to make a World Cup final since France in 1968.

Johnson, whose mother is Samoan, posted a heartfelt five-minute video on Instagram wishing the Samoan team well in the final.

“For my boys, the Usos! The Toa Samoa rugby team. They are going to the men’s final of the Rugby League World Cup. This is a big deal. They are making history in the world of sports, in the world of rugby. This is the first time that our island, our country, our culture of Samoa has ever gone to the finals for any sport.

“They are making history and I could not be more proud of them.

“I just want to thank all the fans around the world. Thank you to all the players who reached out to me, who buzzed me. I’ve been so snowed under, so busy with all the other sh*t going on. I finally got the word and I wanted to jump on, send a message.

“This Saturday is the big game. There are a few things I want to share with you guys, I know you have so much on your mind right now. Pressure. The pressure to deliver, the pressure to perform.

“You have the world watching you and you have so much on your shoulders. Right now you are proud grandsons, proud sons, proud husbands, proud teammates, proud brothers, proud Usos.”

The wrestler-turned Hollywood actor encouraged the Samoan team to show “grit” and claim a historic victory in the final over Australia.

“Pressure, I understand what it’s like,” The Rock said.

“There’s a few things I always think about and I want you guys to think about this too. I know you’ve got a lot of stuff on your mind.

“Number one is grit. There’s a term you guys know called “fa’a Samoa”. I know my Samoan always needs some improvement because I’m always learning. But that is one of the many Samoan terms that I always embody.

“The other one is legacy. You guys are defining your legacy right here, right now. History is watching but our ancestors are always watching.

“So when you take that field this Saturday in Manchester and you have that grit, your DNA is just full of that Samoan pride and culture. You think about that legacy you want to define. “You’ve already made history. You’ve arrived. When you take the field in Manchester and leave it all out there and you win. That’s the other side to legacy. I’ve got goosebumps right now.

“If I was there with you guys on Saturday I’d put on a Toa Samoan jersey and I’d take that field. Man, I’d be running that rock with you guys. Probably get my ass kicked but that’s OK.

Samoa will go in as underdogs against Australia but with a side boasting serious NRL talent including several Penrith Panthers premiership players, an upset could be on the cards.

The Rock’s impassioned message was well-received by the Samoan players.